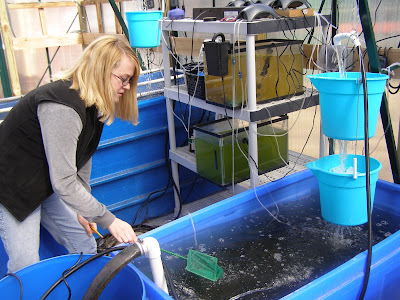 Aquaponics is an intricate circular chemical sequence often described, in a simple manner, as, “you feed the fish, the fish feed the plants and the plants clean the water for the fish.” On a grand scale Mother Nature uses aquaponics to make the world grow. Without natural aquaponics (in our ponds, streams and fields) we simply could not exist here on earth.
History of Aquaponics:
Other than Mother Nature’s natural aquatic eco systems, aquaponics first appeared at least 1,500 years ago in China. One entrepreneur got tired of dragging feed out to the ducks, the finfish and the catfish. He stacked the ducks in cages above the finfish and moved the catfish downstream from the finfish. Now when he fed the ducks their droppings and uneaten food fell into the water with the finfish. The finfish ate and “processed it.” The wastes from the finfish flowed downstream and sank to the bottom, giving food to the catfish which are natural bottom feeders and scavengers. The processed feed and anything that the catfish missed was channeled out to the fields to feed the rice crop. He fed once and harvested four times. The only drawback was that it was outdoors, so it got cold. Everything froze up for 5 months of the year. The theory was good but the execution left a little to be desired.
The Inca’s of Peru practiced a different style of aquaponics before the Conquistadors arrived. They dug oval ponds near their mountain dwellings, leaving an island in the center. After the ponds filled, they added fish. Geese flew in, harvested their meals from the water and relaxed on the island. Their droppings and fish scraps quickly turned the island into a super rich, high quality garden. Now not only did the Inca’s have the geese doing the fertilizer work, they also had fresh fish readily at hand and a moat around each garden to keep out hungry prowlers. Plus the mini pond/island system created a local micro-climate that stayed a little warmer than the surrounding mountains, giving extra days of harvest every year. The production from the Inca aquaponic systems fed more people per square mile than any type of farming to this day, in that same type of high arid land.
Aquaponics today:
Aquaponics is back in the news today, not because it’s the “newest rage,” but because it solves many of the vexing problems that strike traditional soil-based growers worldwide.

Water is a scarce commodity. Without clean drinking water humans don’t thrive. And yet, up to ¾ of our fresh water is used to water crops and then it rapidly drains away. Not only is the farmer’s hard-earned money draining away into the ground but, also, as the water drains away, it collects fertilizers and farm chemicals, leaching them into the ground water (our drinking water). The excess fertilizers and chemicals flow into our rivers and bays causing algae-blooms and killing the aquatic life. Roughly 10% of the chemicals that a soil farmer spreads on his fields are actually taken up by his plants, the rest goes on to wreak havoc on the natural life down-stream.

Modern aquaponics recycles water, reusing this valuable resource. The air is also recycled. The fish give off carbon dioxide (CO2) as they “breathe”. The plants take in the CO2, strip off the carbon (C) to build their leaves and release the remaining oxygen (O2) molecules. That oxygen-rich air is filtered and then blown into the water for the fish to recycle. In every aquaponic system wastes in one part of the system are utilized as a resource in another part.

This is really interesting. I’ve heard it rumored that King Tut even did aquaculture. Is this true? It really can’t be all that complex of a system if people have been doing it for so many years..

JMusserreply
– In reply to: D.E.

Here is an article about it: http://www.touregypt.net/featurestories/nefersekheru.htm

“New propagation techniques are now available which give the commercial grower the ability to breed most species of fry at any time of the year to meet projected demands. Breeding in-house also helps assure bio-security since the disease and parasite status of the fish is known from day one, greatly lowering the chance of a loss of the crop.”

This is a very good thing.

It’s a continuous cycle how every living thing can depend and benefit from one another. With the right information, people will get to understand further how this will benefit man and the environment.